CELEBRATING A QUARTER CENTURY OF ELEGANCE IN DENVER'S CULTURAL HISTORY

As Denver Center Attractions, part of the DCPA since 1979, courted ever-larger and more elaborate Broadway productions, shows increasingly had trouble squeezing into the Auditorium Theatre. Plans for a new, larger theatre simmered for years. Finally, in 1984, Denver Mayor Federico Peña and Colorado Governor Roy Romer spearheaded a campaign to raise $8 million to supplement $27.5 million in city bonds to build a new venue. The Temple Hoyne Buell Foundation provided the lead naming-rights gift of $3 million to honor the prominent Denver architect and developer who died in 1990, a year before the new theatre opened.

The plan by Beyer Blinder Belle of New York City called for the gutting of the Auditorium Arena to build a proscenium theatre fronting the galleria. Designed to complement the 1908 auditorium and the modern Boettcher Concert Hall and Bonfils Theatres, the Buell featured an open glass front that helps to integrate it into the total complex. The original auditorium walls remained as the outer shell of the theatre. Roughly eight thousand pieces of sandstone in shades of gray and pink, from a Lyons, Colorado, quarry formed the new interior walls. Some of the stones have fossils in them, and many show striations ranging from rust red to white. This soft stone has the advantage of being neither too absorbent nor too reflective for amplified performances.

The theatre also has a state-of-the-art sound system that includes three hundred speakers located throughout the house. The high ceiling was built to accommodate the chandelier that crashed down during The Phantom of the Opera, the first production staged at the Buell. The stage is equipped with enough electrical power to light four city blocks. VIPs can mingle in the Marvin and Judi Wolf Room, a small, deluxe reception facility named for its benefactors. As a surprise for his red-headed wife, Marvin Wolf had a red wolf painted into the corner of the room. One wall features a much larger mural painted to resemble the view from the Wolfs’ California residence. 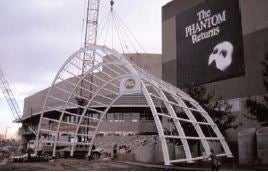 The Phantom of the Opera attracted people from twenty-six states and sold out its ten-week run. Although most gave the show and the theatre rave reviews, some critics believed the Buell too big to host local community groups and labeled it a white elephant. But the Buell exceeded expectations. By 1998, Rodney Smith, then general manager of Denver’s Division of Theatres and Arenas, reported it was bringing in $26 million a year. According to the national industry publication Venues Today, the Buell is second only to the Fox Theatre in Atlanta, which is almost double the size of the Buell, in total gross and attendance for venues with five thousand seats or less.

The Buell elevated Denver to the top rank of roadhouses, capturing national touring acts on their initial runs. Its proscenium stage accommodates even the largest productions—although a hole had to be cut in the back wall to accommodate the helicopter set used in Miss Saigon.

A successful first season in the Denver Performing Arts Complex, managed and operated by Denver Arts and Venues set off what the DCPA called a “theatrical renaissance in downtown Denver.” Following the elaborate opening gala and the sold-out run of Phantom of the Opera, the next two major shows, A Chorus Line and Bye Bye Birdie, also sold out. Since then, the Buell has become one of America’s busiest theatres, and the place selected to launch the national tours of Walt Disney’s The Lion King as well as Sunset Boulevard, Oklahoma!, Barrymore, and the revival of Hello, Dolly! The Buell has also accommodated Les Misérables, which has stopped in Denver more than any other touring title and sold out every run.

Rodney Smith credits the opening of the Buell Theatre with revitalizing the Denver Performing Arts Complex. “I enjoy standing in a theatre lobby to get that feeling of electricity,” Smith told Facility Manager magazine in 2006. “On the opening night of The Lion King, where we opened the national tour, I realized, this is why we do what we do. We know that people would walk out feeling good about themselves and what they had experienced.”

With the Buell bringing more theatre-goers into the city, the DCPA sought to complete more of Kevin Roche’s master plan for the Denver Performing Arts Complex. Semple Brown Design added the third glass section of the galleria, which culminates in a flared opening onto the Speer Boulevard grand staircase and lawn. As part of the $2.4 million project, Semple Brown also redid the red sandstone walkway under the galleria, providing adequate drainage to keep rain, ice, and snow from damaging the stone and tripping up patrons.

With the opening of the Buell Theatre, an upgrade of the galleria, the acquisition and renovation of the Tramway buildings, and the DCTC’s 1998 Tony Award for Outstanding Regional Theatre, Denver’s world-class performing arts complex grew even classier. But first-class theatre is not the complex’s only attraction–its thespians share the spotlight with orchestral music, opera, and ballet.