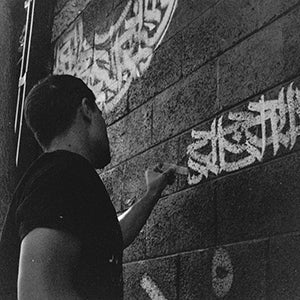 As part of this celebration, Ahmad "Balance" Alwazzan will share brief remarks about:

This event is free and open to the public. Please RSVP.

Ahmad "Balance" Alwazzan is a 21-year-old Kuwaiti muralist. Balance has been creating mural installations in both Kuwait and Denver for more than 12 years. He came to Colorado in 2015 to pursue his academic career in mathematics. As he continued toward that objective, he worked on the creation of installations tto grow his art career.

In 2012, he developed his own style in Arabic calligraphy as a part of his Middle Eastern identity.By creating this style, Balance not only represents himself but also represents the beauty of the culture and the art of the Arab world. Using his style, he creates ancient geometric patterns filled with contemporary calligraphy expressing his personal emotions, as well as his perspectives, wishes, and visions of the future.

In addition to the different mural installations he created throughout Colorado, he has taken part in various art shows and events in order to further his goal to deepen the appreciation of Middle Eastern culture. Such events included solo and group art shows, the annual mural festival - CRUSH, Artopia, RedLine's annual exhibit, and other commissions. He has been featured in short films and interviews that showcase the beauty of his art form, as well as promoting understanding of the different personal, social, religious, cultural, and aesthetic parts of his work. As a rising young artist, he continues to create installations that aim to continue to unite through cultural and artiststic connections.