Artists Respond to the Concept of Kintsugi

Japanese Arts Network asked Colorado artists for their response to the concept of Kintsugi, what the ideas of brokeness, healing and repair meant to them. 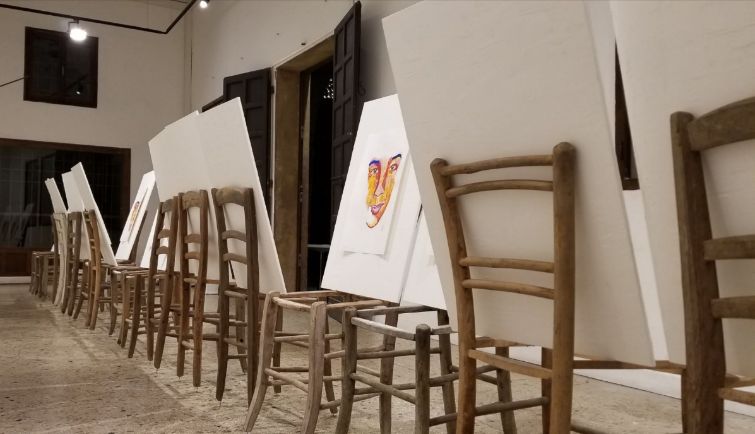 Kintsugi Part II: The Presence of your A
bsence
By Gaby Oshiro

In 1977, artist Gaby Oshiro's father, Oscar Takashi Oshiro, was one of 17 Japanese men and women "disappeared" by the Argentinian government. These Desaparecido were politically-outspoken and considered themselves true Argentinians. Gaby's art installation in Italy in 2018, reflects her memory of his empty chair at her family table. "He was not the ghost that we lived with for years, or the black and white faded picture on a banner waving on the streets of Buenos Aires during a protest, but a human being who gave his life to make a better world standing up to the repression and injustice of the military dictatorship."

The installation was comprised of 17 chairs holding portraits, an extra empty canvas remembering Juán Alberto Cardozo-Higa and the other 30 thousand desaparecidos of Argentina.

Artist's Statement
I spent more than twenty years drawing, painting portraits, eyes of strangers. Always avoiding the subject that it was right in front of me since I was five-years-old, but that I was never seem ready to face. I carried that emotional backpack since the day my dad was taken by the Argentinean military dictatorship during the '70s. The weight was always there, or better yet, that absence continuously reminding me that I didn't have the definite closure; it was also mixed in with the hope that never dies, the hope to see my father again, unexpectedly, the same way that he was taken April 21, 1977.

What’s Kintsugi?
It’s the Japanese art of mending breakage in pottery, but it’s not just a technique, it’s also a philosophical idea connected to the wabi-sabi, which is finding beauty on something imperfect and flawed.

I felt that Kintsugi fit as the perfect metaphor to remember those men and women struck by the tragedy of losing their loved ones so suddenly, having their lives in pieces, they found the resiliency and the courage to pick up those pieces and move on, demanding answers from a government that was committing genocide. Embracing the acceptance of change (mushin), like in “Kintsugi,” the object repaired with gold becomes more beautiful due to its history and flaws.

Artist's Statement
The Japanese art of Kintsugi teaches us how to see the beauty through the reinvention of ourselves. This healing process makes us stronger than before and, where we once felt weakened, we now radiate with resilience.

I believe we are the demons we talk about and maybe instead ridding ourselves of these demons who are actually us, we can heal these demons. Turn our scars into a gold bond that holds us together.