CELEBRATING A DECADE OF ELEGANCE IN DENVER'S CULTURAL HISTORY When Robert W. Speer was elected mayor of Denver in 1904, he quickly aligned his administration with what became known as the “City Beautiful” movement, a national trend in urban planning that emphasized clean, broad, tree-lined streets and flower-filled parks. Speer’s new vision for Denver also included the construction of a civic auditorium, a building that is still serving the citizens of Denver today.

By the 1880s, Denver had already hosted several major conventions, including the American Medical Association, the American Library Association among others. But the city did not have a proper convention facility. As early as 1887, the Denver Chamber of Commerce began to call for the construction of a civic gathering place that would encourage convention business along the Front Range.

Political infighting and lengthy legal battles surrounding the construction of the building raged on for years. More than fifteen sites were considered. Finally, in 1904 Mayor Speer successfully championed a resolution favoring the erection of the Denver Municipal Auditorium and, on May 16, the voters approved a bond issue of $400,000, handing a major political victory to Speer. Scottish-born architect Robert Willison, Speer’s city building inspector and a former employee of noted Denver architect Frank Edbroke, began to draw up plans for the building.

Construction did not go smoothly. Disputes with contractors and charges of incompetence flew back and forth. Mayor Speer was not deterred. Despite a work stoppage, Speer presided over the laying of the cornerstone on September 22. The governor, justices of Colorado’s Supreme Court, city officials and a crowd of 7,000 all watched as the grand master of the Grand Lodge of Masons set the stone in place. The cornerstone contained a 1907 coin minted in Denver, information about the Auditorium bond issue, and a copy of that day’s Denver Republican and Denver Post—but not the Rocky Mountain News which was owned by Speer’s political rival.

In the spring of 1908, Speer was elected to a second term in office. Even though the Auditorium was unfinished, Speer insisted on holding his swearing-in ceremony at the building on June 1, 1908. Workers stopped what they were doing and watched from the overhead steel girders as 10,000 people attended the ceremony.

Denver opened the doors of the Auditorium for the city’s first and only major party political convention so far on July 7, 1908. The Democrats nominated William Jennings Bryan for a third bid during the presidency at the convention. The delegates were duly impressed by Denver and the new facility. The exterior of the Auditorium was a classical design created from bricks and terra cotta with large domed cupolas crowning each corner. Inside, the great hall measured 246 feet by 145 feet with exterior corridors providing easy access to all areas. Fully opened, the hall could seat 12,000 people. 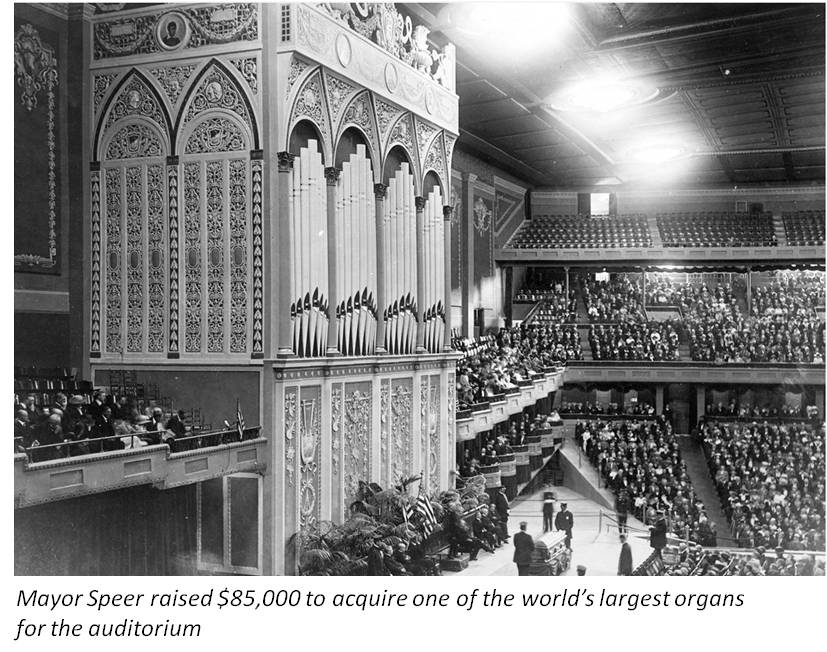 The Auditorium also became the anchor for what was then Denver’s theater district. The State, The New Victory, The Empress and many more theaters decorated with miles of neon and twinkling lights lined the streets east of the Auditorium, making Curtis Street what Thomas Edison once described as the brightest street in America.

The Auditorium soon became the heart of Denver’s civic life, hosting pageants, Shrine circuses, the policemen’s ball, flower shows, farm exhibitions, high school graduations, Boy Scout jamborees and theatrical and musical performances to name just a few. During World War I, 700 U. S. soldiers were quartered in the building for weeks. Moveable walls could divide the space into smaller areas. In addition, a large proscenium arch could move into place, transforming the hall into a traditional theater in approximately four hours. The arch was sixty feet wide and fifty feet high and built in three sections, each section weighing several tons. Seven thousand incandescent lights decorated the exterior of the building. Inside, fourteen electric sunburst chandeliers illuminated the proceedings. 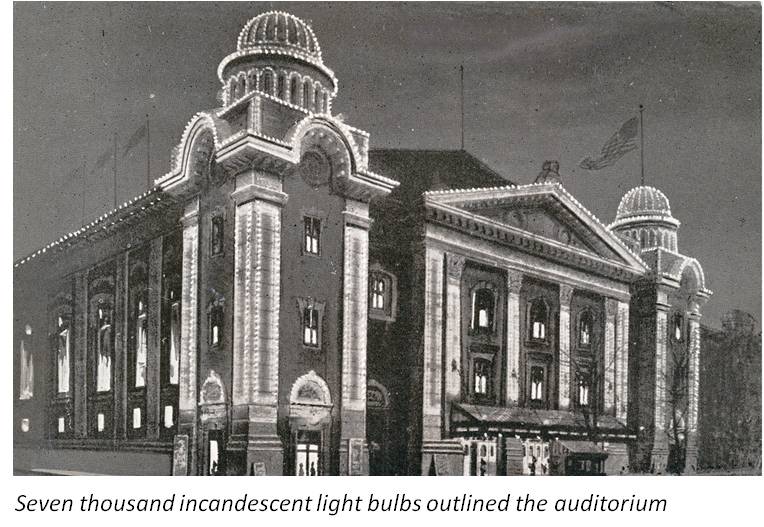 By the 1940s, the Auditorium had fallen on hard times. What was once considered one of Denver’s crown jewels had started to seem cramped and outmoded. City building inspectors suggested improvements to meet fire codes. Still demand for the space continued and in 1947, a bond issue was approved that allowed for the construction of the Auditorium Arena next door to the old facility. (The Auditorium Arena would eventually make way for the Buell Theatre.)

The first major remodel of the Auditorium occurred during the Quigg Newton administration. The moveable walls were taken down and a permanent theater that could seat approximately 2,000 was constructed inside the existing walls. The roof was replaced and the original cupolas were removed. About ten years later, meeting rooms were constructed behind the stage as a supplement to the new convention center, Currigan Hall, built across the street.

The Auditorium played host to a virtual who’s who of American entertainers over the years. By mid-century, it functioned as Denver’s opera house, hosting touring opera productions from both coasts. In the late 60s, a young producer named Robert Garner came to town and brought Broadway with him. Thousands flocked to the Auditorium to see the best of Broadway throughout the seventies, eighties and nineties. The Auditorium continued to host other events such as ballets, concerts, lectures, meetings, graduations and more. It made perfect sense when the Denver Performing Arts Complex grew up around the beloved Auditorium Theatre. Beginning in the late seventies, construction began on a four-block complex that would grow to become the largest performing arts facility of its kind under one roof. It includes the Buell Theatre, Boettcher Concert Hall and the Helen Bonfils Theatre Complex. 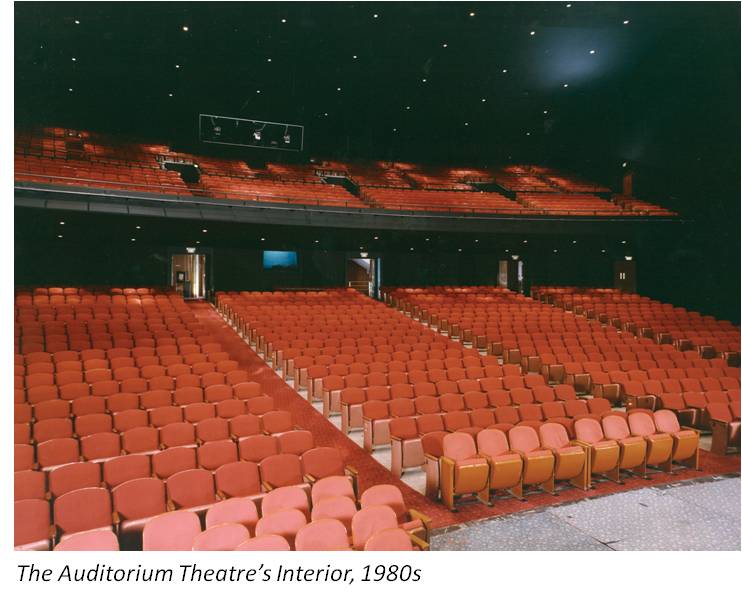 By the dawn of the 21st century, the Auditorium was again due for a renovation. While the building was in use until it hosted the final performances in December 2002, it was apparent that many updates were required in order to continue serving the citizens of Denver. Mayor Wellington Webb appointed a blue-ribbon commission to study the renovation project. The task force, chaired by Wilma Webb, included Jim Copenhaver, Hugh Grant, Raymond Jones, Jeremy Shamos and Judi Wolf. The task force recommended to the mayor that the City completely reconstruct the interior of the building and in 2001 and 2002 a broad coalition of Denver’s performing arts leaders began campaigning to support the project. Citing the building’s technical shortfalls and life safety concerns, the group worked closely with Fabby Hillyard, Director of Denver’s Division of Theatres and Arenas, and Mayor Wellington Webb to secure the funding needed to accomplish a major reconstruction of the hall.

Denver voters overwhelmingly supported the renovation of the Auditorium in 2002, passing a $25 million general obligation bond by a resounding 68%. Additional funding for the project came from existing seat tax revenues, grants from the Colorado State Historical Fund, and private donations and pledges. 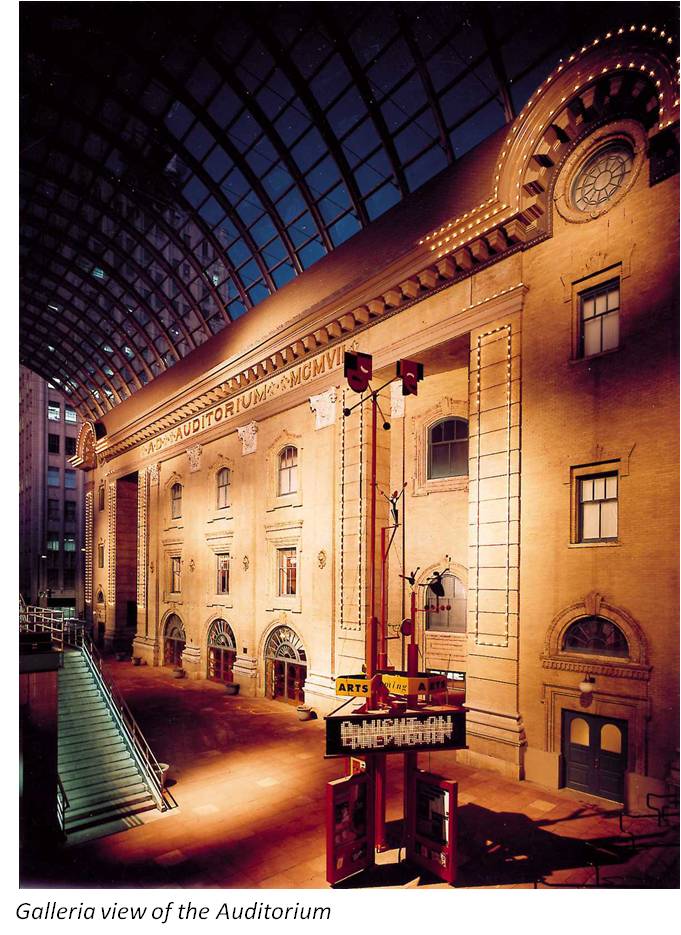 As construction began, Denver welcomed a new administration led by Mayor John W. Hickenlooper, who appointed Jack Finlaw as the Director of Denver’s Division of Theatres and Arenas. Late in 2003, Denver was honored by an extraordinary act of generosity. The family of Denver businessman George Caulkins donated $7 million to the City of Denver to finance additions to the Auditorium renovation project. The new venue inside the building is named in honor of Eleanor Newman Caulkins, known to family and friends as Ellie and as Denver’s “first lady of opera.” 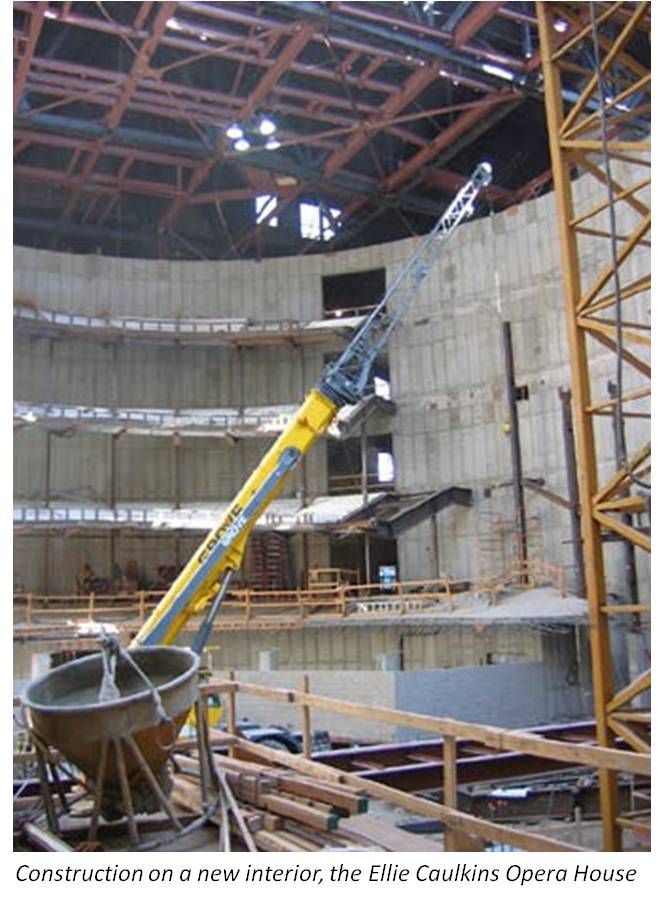